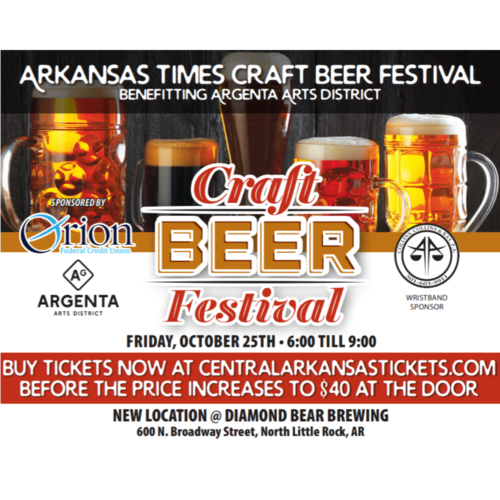 The Arkansas Times Craft Beer Festival is now in its 9th year and it's always a good time. Sample great beers from multiple regional and national craft breweries. Local food trucks will be on-site with food for purchase. Plus, music by DJ Mike Poe with a dance party! Tickets are $40.00 at the door! We sold out last year so get your tickets early! Benefiting the Argenta Arts District.

Visit the LRCVB tent to find out about the Locally Labeled Passport Program - your ticket to learn about and enjoy Little Rock's 11 craft beer breweries, two wineries, and historic distillery.

And head to the Fayetteville Ale Trail tent to experience the Ozarks' finest craft brews! The Ale Trail gives visitors and locals alike a glimpse into the unique craft brewery culture of Northwest Arkansas.

And more to be announced!