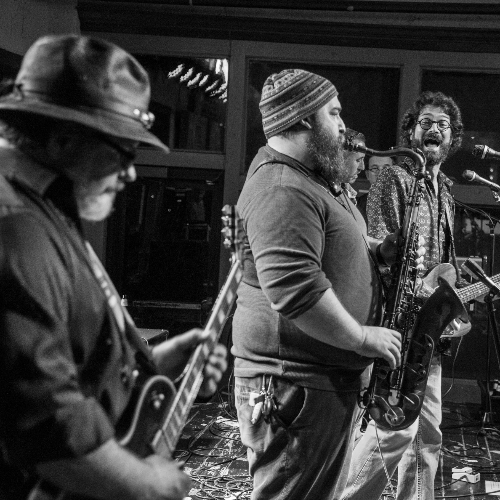 Nahlen is an Arkansas Ambassador. His original music has been called “finely crafted, soulful, deftly fuses funk, jazz, gospel, pop and hip hop.” The Band’s live performances showcase each player’s forte, and no two gigs are the same.

Nahlen has released two albums, “Better Than I Thought It Could Be” (the title track was featured in an Arkansas Parks and Tourism commercial) and “Cicada Moon,” and three singles: “I Might Be Leavin’” (feat. Big Piph), “In the Old Days” and “You Fool.” All of these are available on iTunes, Spotify and other streaming services.

A socially conscious lot, Nahlen and the Band often play benefit shows, which in 2018 alone helped KABF, Puerto Ricans in Arkansas (Nahlen coordinated this), The Van, the Buffalo River and Animal Village. They also performed at the inaugural Central Arkansas Music Awards.

Nahlen started playing guitar 30 years ago and has been a full-time musician for the last 15. He regularly performs alone, in his namesake full band or in a duo with Hale, Nick Devlin, or Luke Johnson. Past stints include Dead Fish, Sunny Daze, Big John Miller Band, Quadraphonic and Pepperland. Once a month, he hosts the Collage Radio Show on KABF.