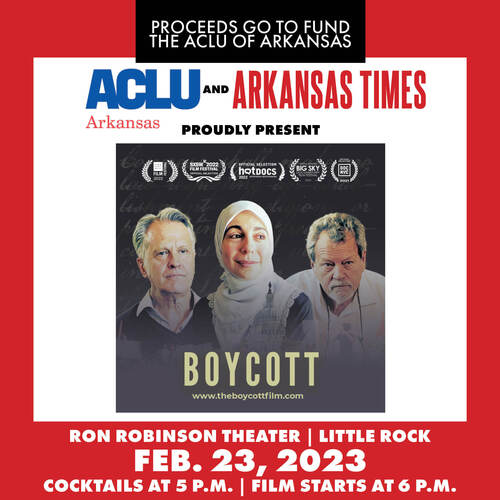 Film starts at 6 PM with a cocktail reception at 5 PM.

In Boycott, award-winning filmmaker Julia Bacha pulls back the curtain on a movement of

of its state advertising.

After Alan Leveritt, publisher of the Times, an attorney in Arizona, and a speech therapist in

Texas are told they must choose between their livelihoods and their political beliefs, they launch

legal battles supported by the ACLU. Their stories cut to the heart of a pressing national issue

The film is 73 minutes long and will be followed by a 30-minute Q&A with Suhad Babaa, the

film’s Producer, Alan Leveritt of the Arkansas Times, and the ACLU of Arkansas team.