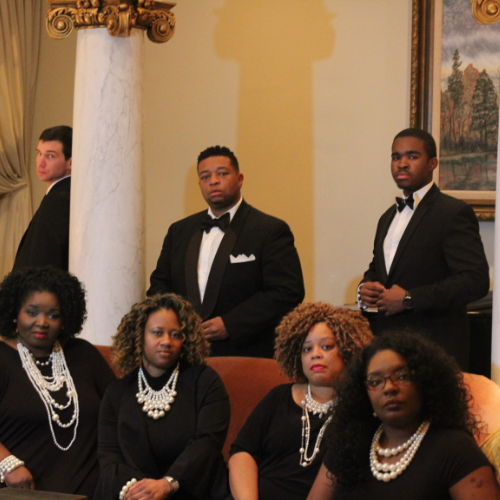 For the final show in his March Sessions, Read Admire has invited Psalm 150 to serenade the South on Main stage with sounds of gospel music. Concert starts at 8 pm. Purchase advance tickets for $7 or pay $10 at the door. Tickets do not guarantee you a seat. Please call (501) 244-9660 to reserve a table.

Psalm 150 singing group was formed from a vision ordained by God. In the summer of 2003, Christopher Watkins, founder, was in the process of planning a homecoming celebration at his local church. After countless calls and word of mouth, God allowed only four of friends to show up for the rehearsals. This fellowship led to the very first concert for Psalm 150. Afterward, the group began singing at each other’s churches and other local events. In the spring of 2006, Psalm 150 went through a shift change with the addition of more members, and singing original music. The city of Little Rock noticed the innovated sounds and the anointing placed within the harmonious, pure, rich vocals of the singers, and begin to support the ministry on many occasions.

In the fall of 2008, the group suffered a great loss of one of its faithful members, Rev. Charles E. Redic Jackson. This, however, did not damping the spirits of the ministry, but rather gave reason to continue the call that God has on this ministry, and to use the songs given to bring the unsaved close and the saved closer to Christ.

Psalm 150 has song at diverse venues and used the talents that are God-given to spread the word of the Most High. The group is currently working on a project that will minister to the masses. Psalm 150 will continue to “let everything that Breath, Praise the Lord!”

Read Admire is an American guitarist, songwriter, arranger, and producer. Other hats he wears include chef, farmer, and environmental steward. By day Read runs The Urban Food Loop Project, a Little Rock-based non-profit with the goal of making communities compostable. (Shout out to South on Main for being responsible composters since day ONE!!!) By night Read works his hardest to be someone Quincy Jones would hang out with. Read strongly believes nothing brings people together like food and music and has built his life around both. Read has a degree in Music History from UALRand a Masters in Public Service from The Clinton School. From 2009-2012 Read helped build the Therapeutic Music program at the Arkansas State Psychiatric Hospital.In 2015 he worked for the South African National Youth Orchestra, touring the country with the orchestra as a program consultant. During his time in South Africa, Read lived and jammed with world-class orchestral and jazz musicians, chatted with Arch Bishop Tutu at the symphony, and saw the youth orchestra make grammy award winning Finnish conductor Osma Vanska cry! (If you didn’t know, Finnish men don’t cry.) South Africa taught Read about the magic that can happen when friends gather to make music. So this month Sessions is about sharing that magic with you! Each artist or group this month was invited because they embody the magic that Read encountered in South Africa.

Musically Read is involved in several projects. His passion project is Belle Camino, a band he and his wife Claire Admire formed in 2018. Belle Camino means “the Beautiful Path”, and is one of the tastiest musical melting pots this side of the Mississippi. In this pot, you will be sure to spot some roots rock, some soul, some R & B & Jazz, some samba, some Bossa, some chamber pop, and some downtempo electro bop. Good luck putting Belle Camino in a genre box, but here’s a fun fact for ya: Claire and Read wrote their first song together at South on Main while they were on their first date back in February 2016. Everybody say “Awwwww!”Read also plays guitar in 2 jazz combos, the UCA Big Band, Psalm 150 Gospel Choir, and is a member of the Place Of Harvest Praise Team. He can be found most Fridays 6-9 sitting in at Dave’s Place.