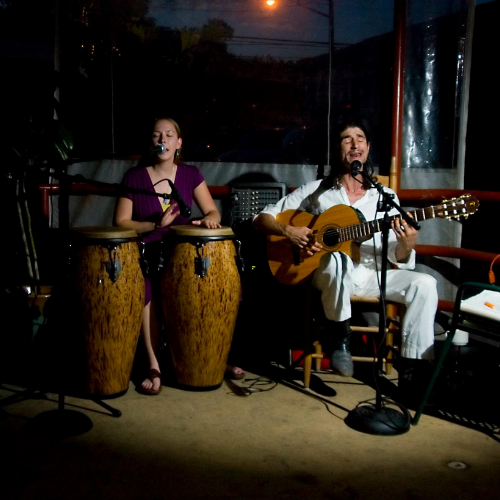 The GinSingers will take you on a musical journey of a wide ranging world of jazz on Wednesday, March 20 for Sessions at South on Main, hosted by Read Admire. Concert beings at 8 pm. Purchase advance tickets for $8 or pay a $12 cover day of show. Tickets do not guarantee you a seat. To reserve a table please call (501) 244-9660.

“With sets that cover everyone from Stevie Wonder and Bob Marley to Nat King Cole, Tito Puente and Charlie Parker, as well as the band’s own lively originals, Cula du Café play a festive mix of pop, salsa, and jazz. Percussionist Jose Galeano ignites the band’s onstage fireworks with his thundering conga playing while drummer Chis Searles adds to the beat with his expert Latin rhythms. Meanwhile, bassist Jeff Haley and bandleader/vocalist/guitarist Joey de Lago intertwine their dancing chords, allowing sax player Elias Haslanger to captivate the audience with his smoky jazz aura.”

Joel started playing classical guitar at age 8 under the instruction of his uncle Tom Johnson, of the University of North Texas. He began taking regular lessons with Nick Digennaro at the same time. While getting a degree in Economics at TCU Joel continued his classical guitar studies with Chip Christ. After Graduation Joel started teaching classical guitar lessons as the director of the North Dallas/Plano/Carrollton Childbloom Guitar Program. At the same time he began studying Flamenco with Miguel Antonio. Shorty after Joel met a great guitarist, Joey De Lago, who taught him the Flamenco/Afro-Cuban guitar technique, Mano-Roto. While under the musical apprenticeship of Joey De Lago, Joel founded the Music school, Child Play Music, played rhythm guitar for The Joey De Lago Band. Today, Joel runs The Child Play Music Guitar School and plays in a number of bands that gig all over the Dallas metroplex.

Read Admire is an American guitarist, songwriter, arranger, and producer. Other hats he wears include chef, farmer, and environmental steward. By day Read runs The Urban Food Loop Project, a Little Rock-based non-profit with the goal of making communities compostable. (Shout out to South on Main for being responsible composters since day ONE!!!) By night Read works his hardest to be someone Quincy Jones would hang out with. Read strongly believes nothing brings people together like food and music and has built his life around both. Read has a degree in Music History from UALRand a Masters in Public Service from The Clinton School. From 2009-2012 Read helped build the Therapeutic Music program at the Arkansas State Psychiatric Hospital.In 2015 he worked for the South African National Youth Orchestra, touring the country with the orchestra as a program consultant. During his time in South Africa, Read lived and jammed with world-class orchestral and jazz musicians, chatted with Arch Bishop Tutu at the symphony, and saw the youth orchestra make grammy award winning Finnish conductor Osma Vanska cry! (If you didn’t know, Finnish men don’t cry.) South Africa taught Read about the magic that can happen when friends gather to make music. So this month Sessions is about sharing that magic with you! Each artist or group this month was invited because they embody the magic that Read encountered in South Africa.

Musically Read is involved in several projects. His passion project is Belle Camino, a band he and his wife Claire Admire formed in 2018. Belle Camino means “the Beautiful Path”, and is one of the tastiest musical melting pots this side of the Mississippi. In this pot, you will be sure to spot some roots rock, some soul, some R & B & Jazz, some samba, some Bossa, some chamber pop, and some downtempo electro bop. Good luck putting Belle Camino in a genre box, but here’s a fun fact for ya: Claire and Read wrote their first song together at South on Main while they were on their first date back in February 2016. Everybody say “Awwwww!”Read also plays guitar in 2 jazz combos, the UCA Big Band, Psalm 150 Gospel Choir, and is a member of the Place Of Harvest Praise Team. He can be found most Fridays 6-9 sitting in at Dave’s Place.